In this article, we will discuss the top beginner archery bows in 2022. If you are looking for a new bow to start your archery journey with, then this is the perfect article for you! We have ranked the best beginner compound bows and recurve bows based on price and quality to make it easier for you to find a bow that fits your needs without having to spend hours doing research.

Archery bows have existed in various forms throughout history. Bows have evolved through the ages, and many are now made with components such as fiberglass and carbon fiber, and some have advanced shooting mechanisms. Different types of bows available include recurve bows, long bows, compound bows and crossbows, giving experienced and new archers many options.

The Archer bow is a symbol of power and skill. It has been used for centuries as one of the most effective methods in battle, able to pierce even through shields or helmets with ease!

We are going to go into deep detail about each of the compound bows on our list, but before we get to the reviews, here is a short summary if you don’t want to read the extended version. In our opinion, these are some of the top choices for compound bows for people who are new to archery.

This bow is great for beginners because of its adjustable draw weight. This compound bow is a smooth pulling, fast shooting, and versatile bow.

Can be used for hunting, bowfishing, target practice and more! Fully-adjustable draw length 24.5-31″ and draw weight 30-70 lbs make this the perfect archery kit for Beginner adults and youth alike.

The Barnett Vortex Lite is a compound bow for preteens or teenagers; designed to grow right along with young archers as their skills and statutes advance.

The draw length and draw weight both adjust with included modules and instructions, and the bow itself is outfitted with all the features they need: oversized dual cams, three-pin fiber optic sight, three fiberglass arrows, two-piece attached quiver and more.

The CenterPoint Elkhorn is an easy to use compound bow ideal for pre-teen, intermediate, or smaller framed youth archers.

With a low draw weight of 15-pounds and 65% let-off, young archers can build confidence, skills, and proficiency to their target shooting practice.

The TOPOINT ARCHERY M21 is one of the most popular archery bows for beginner younger/smaller framed adults and teens.

This bow can be used by beginners to expert level shooters. Made out of durable aluminum alloy with a smooth cams rotating system that allows for a smooth draw and accurate release every time.

The Leader Accessories Compound Bow is a great starter bow for adults and teens. Not only will this compound bow be fun to use but also build self-confidence in archery skills.

The draw weights of the bows range from 30 to 90 pounds with adjustable draw length up to 31” making it suitable for most beginners or intermediate shooters.

How to Choose the Right-Sized Compound

It is important to understand how to choose a bow that is sized to meet your personal needs. Aesthetics play an important role in purchase decisions, but when it comes to compound bows, there is more to a perfect fit than how the bow looks. We have put together an easy-to-understand guide on factors that you should keep in mind when choosing a compound bow as a beginner archer.

Things to consider before purchase

When you make up your mind to step into the field of archery, there are a few things you need to know before you decide on the compound bow.

Every piece of equipment has a few specifications that must be understood and the most suitable compound bow is one that complements you.

Draw length is how far you can pull back a bowstring while you hold it and take aim. The ideal draw length measurement will determine whether this compound bow is right for you or not.

How to measure the most suitable draw length:

If you carry a bow with more draw length, you will not be able to focus on aiming, neither will you be able to take a good shot.

Draw weight is the force you have to exert to pull the string back. A compound bow with a lower draw weight requires less effort, hence becomes a good pick for those who cannot exert force or may not be very sturdy.

The axle to axle length or bow length plays an integral part of your shooting experience. The longer compound bows are often better for beginners as they support less force. However, if you are looking for a bow for hunting, a shorter bow will be better.

The Samick Sage Takedown Recurve Bow has a riser that is manufactured with imported Maple wood, for lightweight and highly durable bows. The comfortable ergonomic grip makes it an ideal bow for beginners.

With the pre-installed threaded Brass Bushings, you can easily attach various accessories such as a sight, quiver and bow fishing reel.

This is a very nice recurve bow, perfect for hunting and target shooting. The riser is made of high strength casting aluminum and the limbs are made of fiber glass with maple core.

Limbs can be purchased separately to increase or decrease weight as need, or to share with friends and family, and Save on continuously purchasing full new bows.

Design for Right-Handed shooter. Recommend this bow for someone interested in archery but not willing to spend too much money on it.

This bow is a great option for anyone looking to get into archery. It’s compact, accurate and lightweight.

The limbs are designed with preinstalled threaded bushings for various accessory upgrades such as mechanical rests/plungers sights quivers and stabilizers/bow fishing reels.

Takedown Hunting Recurve Bow with String and Two Arrows, Handmade by skilled craftsmen. It is a high-quality bow that is made of bamboo and fiberglass.

The bows are handmade in the traditional way that has been used for centuries. The limbs are bamboo with black fiberglass, introduction of German laminate technology offers the best toughness and power for the bow.

The Takedown Hunting Recurve Bow is a great bow for beginners. It’s made of wood and fiberglass, which makes it very durable and strong.

The riser is designed with rounded edges and a fine finished handle, making it very comfortable to hold. This comfort will allow you to have the best experience shooting multiple arrows or for extending amounts of time.

Our design is also appealing to the eye making it unique in its own ways.

The Takedown Hunting Recurve Bow is the pinnacle of fit and finish.

The bow features an ambidextrous design, making it easy to use for left-handed or right-handed hunters.

It also has a user friendly design that allows you to easily adjust each limb in order to customize your draw length.

The Recurve Bow is a new design and upgraded from Airobow.

The Recurve Bow is made of Ergonomically Designed High Strength Glassfiber Sheets and Hard Maple, Between Them, is Fixed With Sturdy Screws.

Rounded Edges and a Fine Finished Wooden Handle Which Will protect you From Getting Hurt.

This bow can be used for hunting or target shooting, it’s also suitable for archery beginners to learn the basic skills before moving on to more advanced bows.

The Parts of a Compound Bow

The riser is the body of a bow, and it’s where all the cams are located.

The limbs on a compound bow attach to, and stick out from, the top and bottom of the riser.

The cams are the wheels or discs that are located at the ends of the limbs on the top and bottom of the compound bow.

The bowstring is the cord attached to the top and bottom limb that you nock an arrow to and pull back on.

The cable guard extends at a 90-degree angle from the riser. It’s a small rod that keeps the cables from getting in the way of the arrow and the bow string.

The cable guard works with the cable slide.

The cable slide is a small piece of plastic that attaches to the cable guard and securely holds the cables in place, out of the range of the arrow.

The arrow rest holds the arrow in place as you set up your shot, and in some cases, it stabilizes the arrow after you’ve released the bow string and the arrow is about to leave the bow.

The grip is the part of the bow that you hold in your hand.

The sight is a tool that will help you aim at your target. It’s similar to the sight on a rifle, except instead of “crosshairs,” archery scopes usually have “pins,” and you’ll line up the pins with your target in order to enhance your aim.

The peep sight is a small plastic ring that you slip between the strands of your bowstring to enhance your aim.

The D-loop is attached to the bowstring and is a small piece of very strong string in the shape of a “D.”

Most compound bow shooters don’t draw the bow string with their fingers, and instead use a release aid to pull the string when drawing. The bow strings on compounds tend to be VERY strong, and a release aid can make it a lot easier to draw.

A stabilizer sticks out perpendicular to the riser, and it’s got two functions: to eat up some of the vibration in the bow after you release an arrow (and therefore make the shot a little quieter—a very important feature for bowhunters) and to provide a little “balance” to the bow.

A sling is attached to the riser of the bow, and it slips around your wrist to help you maintain control of the bow during and after a shot.

The let-off is a mechanism built into the bow that allows you to hold it at full draw without any additional pressure applied by your arm, which means there’s no need for you to use up all of your energy holding onto the string. 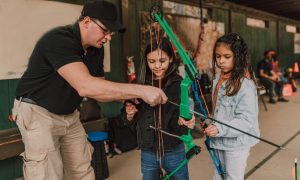 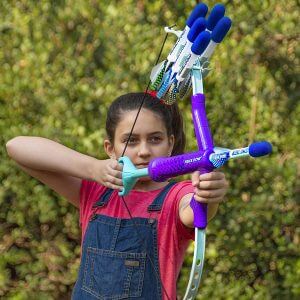 The Best Archery Set For A Child 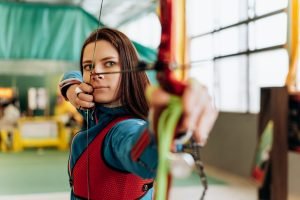