Maybe you’ve heard the phrase thrown around by experienced archers, but never understood it. Hopefully, in this article, I can explain exactly what an archery “anchor point” is so you will be able to understand and use this technique in your own archery shooting. Before we get started with this article let’s do a quick review of our basic archery stance for those who don’t know it yet:

In summary, the idea behind an effective basic shooting stance is to stand upright holding the bow out straight with one hand. For most bows that means gripping the handle at two o’clock if you were looking down on it.

Your shoulders should be even and facing forward with no tilting up or down. Your head should face forward in line with both shoulders looking slightly down so you don’t have to strain when aiming.

Once you are in this position, let’s talk about what an “anchor point” is for archery. Because most types of bows cannot hold their draw weight indefinitely, they need something solid to support them between shots (called anchoring).

2. The Crook Of Your Elbow

Now, when someone refers to an “anchor point” they usually mean where you rest the nocking point on your bowstring which is determined by each individual archer and what feels right for them. Usually, the anchor point is the smallest part of your face that is touching any part of your bow with most shooters focusing on one specific point in their mouths instead of looking at the whole jaw/cheek area: this will be different for everyone depending on how big or small your mouth and face so experiment with it.

So, what you are looking for is to find the smallest part of your face that will touch any part of your bow while aiming at the full draw which could be anywhere along the line from the corner of your mouth where you breathe to just behind or below your eye. Wherever that spot ends up, focus on it and try not to move it (this is why most people like focusing on one “anchor point” in their mouth because if they don’t move anything else but their mouth, they know exactly where their anchor point is).

Once you have found it, make sure this spot does not move when drawing back the bowstring (if you keep moving other parts of your head/face around while drawing back to full draw this is not your “anchor point”).

How do you find a good anchor point?

The easiest way to find your anchor point is to play around with it in front of a mirror. Go through the shooting sequence step-by-step while paying close attention to how you are moving/positioning each part of your face/head when drawing back the bowstring. Once you have found something that seems right, do not change it unless there is a specific reason why you should try something else (i.e., forgot what worked for you or noticed something that was off).

Once you have perfected this technique by finding and using an effective “anchor point” for yourself, you will know immediately if it is wrong because nothing feels quite right if things are moved around too much or are in the wrong place.

For example, if you are using an anchor point that is somewhere on your jaw but it does not feel right then something is probably off because your face/jaw should work just for this purpose – so fix whatever feels off until things start to click again.

If there is still too much space between the string and underside of your nose after making these small adjustments then check how far back you are holding the string because somewhere along that line (from where you breathe to just behind your eye) is your “anchor point” and it should be used as such.

What does not work for an archery anchor point?

There are a few things that will make archery difficult:

1. Holding the string too far forward (more than 4-5 inches from your mouth)

One of the most common mistakes new archers make with their “anchor points” is holding the string too far away from themselves which makes drawing back awkward and difficult because they cannot get a good grip on the string without hurting their faces/necks in some way.

So, even though you might feel like you are doing something right by holding the string farther out in front of you, chances are that it is actually only hurting your ability to draw and aim accurately.

2. Using part of your face/head to hold the string instead of the nocking point itself

Another common mistake archers seem to make when trying to find an “anchor point” is using a section of their face or head (usually their cheek) for this purpose which has various consequences such as:

3. Not finding an effective “anchor point” at all or using one that changes during the draw sequence

The last and most common mistake archers make with their “anchor points” is trying many different ones and not being completely satisfied with any of them.

So, they keep searching which can take a lot of time because there really is only 1 right way to find and use an “anchor point”. Once you have figured out where yours should be, you will know immediately if the archery “anchor point” is wrong because nothing feels quite right.

What are the 3 points of anchor for an Olympic anchor?

The 3 points of anchor for an Olympic or seated shooting position are:

1. Your thumb knuckle should be touching your jaw/neck where it meets the neck just before the ear lobe

2. The string should rest against your bottom lip at about a 45-degree angle to your mouth

3. An arrow placed on the shelf with its nock point facing upward would sit on top of your lower teeth/lip so that you can see through its fletching when looking down from overhead [In other words, you cannot have any gap between the arrow and any of these 3 contact points] .

If all else fails, position yourself in front of a mirror while holding a bow and arrows then look up and drawback slowly until an arrow falls from the string and rest in a position where it is in line with your nose and mouth in a way that allows you to see through its fletching when looking down from overhead, In other words, where they form an imaginary line pointing straight out of your head.

If your nose is drawn incorrectly, it looks like the arrow will hit below the target. This is because you are either aiming at a target that’s too low or actually shooting at a lower angle. The proper way to shoot an anchor point is to draw straight back without any canting of your head or bow arm (to counterbalance poor form).

If this does not correct your canting problem then try looking up slightly during the follow-through after release so that your vision clears the string with all 3 contact points remaining in their respective positions on your face.

You should be able to see everything perfectly centered when you do this which helps prevent canted shots and lining up errors associated with an incorrect archery anchor point. One last thing. If you are having trouble with an incorrect archery anchor, don’t forget to tighten your bowstring before each shot so that everything remains in place and consistent for a more precise aim.

1. For barebow, you don’t need to worry about having your thumb knuckle touching your jaw/neck because it is not needed for this style of shooting

2. In fact, many barebow shooters do not touch anything on their faces. They just use a simple nose anchor with their bowstring resting against the edge of their nose bridge and keeping the rest of the bowstring in place using facial muscles alone so long as one cheek isn’t doing all the work by itself trying to hold everything in place

3. There are 2 main reasons why most barebow arrows hit below or above the target center when using a nose anchor: Your cheek is not doing its job in holding the string in place such that it rests next to your nostril instead of too far to the left or right Your drawing elbow is either pointing upward or downward.

If you try looking up during follow-through to correct this, then you will also need to raise your bow arm slightly because your shoulder and elbow should both be at 90 degrees with respect to the ground when shooting barebow.

It’s easy enough for an Olympic archer since they keep their leading arm locked straight during the draw and aim phases so that everything stays in one position throughout the shot sequence.

*** Note: This advice does not apply to compound archers because their arms are already bent before they start drawing the bow string.

What is the best anchor point for drawing a bow?

For recurve archers, the answer to this question is not so simple. However, according to the ISSF (International Shooting Sport Federation) ruleset, the correct answer is that it depends on what part of your face you touch at full draw.

The following are things to know about your “anchor point”. Even though these things may seem like common sense, they are important because even experienced archers can get confused between each item or simply forget them if they do not practice enough.

1. Touching any part of your face with an arrow other than your cheekbone will cause a “right-of-way violation” (because only one bowstring contact point per archer should).

2. You should not touch the arrow anywhere on your face when you are preparing to draw.

3. You can touch an object other than your cheekbone with the arrow, but that object should be one of the following: (a) your jawline, (b) your neck, or (c) a string loop (if you use one).

4. The anchor point you use should not prevent you from drawing “past parallel”.

5. Any part of the head which is touching the bowstring when it is at full draw will result in a “right-of-way violation” because both archers’ bows are pointing to the 10 rings. This means that if someone violates this rule then they will get disqualified just like if they violated rule 1).

(a) The bowstring should be in front of really hard bone structures.

(b) not touching your hair.

(c) not touching your eyebrows.

(e) passing through a “smooth” part of your face (like the philtrum or groove between lip and nose).

7. For each time that an archer’s bowstring touches something which is not “on the cheekbone”, then they will be assessed one point. If the archer was touching their chin, then it would be a 2-point penalty. One point for touching chin + 1 point for violating rule 6).

8. For each time that an archer’s bowstring touches them while drawing, then they will lose two points per infraction. This means if their string touched them twice, then it would be a 4-point penalty (two for each infraction). To this rule is if the archer touches their face, ear, or hair while drawing and the string doesn’t pass through a “smooth area” (see rule 6) then they will get no penalty.

9. The ISSF says that if an archer is over 180cm/5’11” tall then it would be okay for them to put their finger on the arrow at full draw. However, they warn that this infraction should not be treated less seriously than any other right-of-way violation. 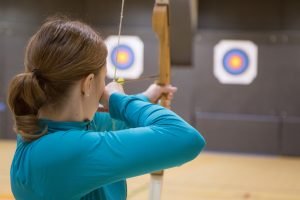 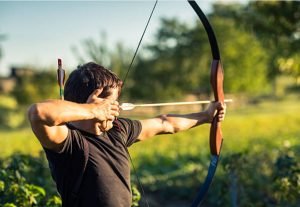 Getting The Perfect Archery Grip When Holding A Bow 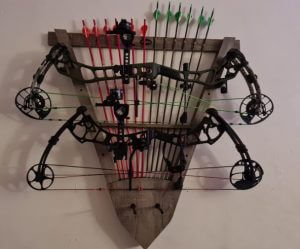 Where Can You Leave Your Bow If Not In Use